My Oh Miners…. Thanks For The Reminder

When the entire world tunes in to watch the same news on television, their computers, and even cell phones, it almost always means a tragedy. That something catastrophic has happened… like a terrorist attack, 9/11, The Haiti Earthquake, a volcano eruption, hurricane damage, wars or bombing. We all sit wide-eyed in front of the screens silenced with disbelief as our eyes watch the unthinkable unfold.

This week however, was different. This week the world watched as the exception to the rule occurred. This week people across the country and around the world watched in relief and disbelief as 33 miners were pulled from ½ a mile underground where they were trapped for 69 days. Each and every one of them was successfully pulled to the surface and saved.

In a time where the slumped economy, debt, unemployment, terrorism, war and depression plagues our daily headlines; and we are so used to expecting the worst, watching this rescue unfold seemed surreal. As it streamed lives across the screens of our television, laptops, ipads and cell phones… it was so refreshing it seemed magical.

All odds were against these 33 men, statistically and logically things were not in their favor, yet, they survived anyway.

Over the past 2 days, I have heard people saying “that is stuff movies are made of” and I laugh to myself thinking that 10 years down the road, when Hollywood undoubtedly makes a movie about this event, our children will look up at us and ask,

“Did that really happen? Did they all really make it? ”

And they probably won’t believe us when we nod in positive reassurance. They will ponder in disbelief because what happened this week is only truly believable when seen with your own eyes.

If it were a movie we would mock the ending as cheesy, predictable, sing-songy. And as critics exited the theatre they would whisper to each other,

“They all can’t make it out, that’s so cliché.”

So this week, as the world held their breath waiting for all 33 men to surface, it was comforting to know that those “movie moments”— when hope defies logic and life defeats death— really do exist.

As the footage streamed through my TV I didn’t watch the red ticker tape that ran across the bottom of CNN giving me other updates. I didn’t listen to the reporter commentating on the size of the capsule, the age of each man or how long each had been a miner.

Instead, I tuned all of that out, and found myself all consumed with the survivor’s faces.

I watched as each man shielded his face from the bright lights, squinting their eyes as the sunlight drenched their face. I watched as they got their bearings and the medics on site removed the medical monitoring devices. Each man seems overwhelmed, but also stoic. They did not come out of the capsule cheering, clapping or overly excited. In fact, their initial reaction was quite anti-climatic… that is until they made eye contact with a loved one. This was my favorite part.

Even though these men were armed with dark sunglasses, it was as if you could pinpoint the moment their eyes adjusted to the sun and fell onto a familiar face. In that millisecond, the stoic exterior melted away and the corners of their mouths turned up into a small smile. What they did next is what surprised me.

They didn’t run to their loved ones right away. It was not at all like a scene plucked from a romantic movie where the two lovers run full blast at one another. Instead, almost all of the men stood still for just a moment, before they closed the gap between themselves and their loved one. It was as if their lack of movement allowed them to really soak their loved one in before they embraced.

When they finally did reach one another there was no passionate kiss between husbands and wives or girlfriends and boyfriends. Instead the initial reaction was a hug. Not just a quick embrace but a real good hug. One where you completely fill your arms up with that other person and really just hang on for a moment.

They all hugged their loved ones like this, their wives, girlfriends, children, mothers, fathers, sisters, brothers, and friends. The news is calling it the “hugs felt around the world” and I have to agree to this hallmark-coined phrase, because it’s true.

The 9th man to be pulled up, and oldest of the group, Mario Gomez 63 years old, immediately upon surfacing acted slightly different than the rest. Instead of staying still, he dropped to the ground in prayer before he embraced his wife. I don’t think he did this to make a religious statement or stance. Instead, because we have the gift, the luxury of watching, this man inadvertently shared a personal moment with the world.

I don’t know one any of the 33 miners. I don’t have a friend whose former neighbors co-worker married one of those men. They are not in any way associated with me, yet when I watched them finally get to hug their loved ones or drop to their knees thanking something greater than themselves that they survived, I couldn’t help but feel moved and emotionally overwhelmed.

It’s moments like that when you can watch tears of joy fall from someone’s eyes and you can’t help but be moved. You know, tears of joy don’t’ make a cameo appearance very often? They are reserved for moments, when we are truly in awe of life. This week was one of those moments and we don’t realize how lucky we are to be able to watch and be a part of it.

As much as I rag on technology for acting as an isolator, deconstructing social skills and human interaction, this week I was thankful for globalization and all the gadgets that allowed me to witness the rescue.

Luis Urzua, the 55 year old foreman and last man to be lifted to safety, more than 22 hours after the rescue efforts was quoted saying this…

“We had the courage and the spirit to fight, to fight for our lives and our families and that is what is most magnificent.”

Luis is right. What is most significant is the ability to hold tight to hope; a hope to have another chance to soak in and see the people that matter the most to you. That’s what it’s really all about isn’t it? I ’m thankful these 33 men reminded us of that.

In 2010, with packed schedules, the drive to multi-task and over- achieve, to stay current on paying bills, to stay up on responsibilities and to make our daily failed attempts to “do it all,” we need a little perspective. We need to be reminded to NOT allow ourselves to be all consumed with the messy-ness of life and instead remember what really matters. The people… So next time you see a loved one, take a moment and soak them in. 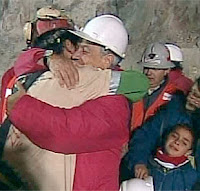