Whether the Weather Whispers a Reminder

This week, in Northeastern America, those of us holding tight to grips of summer had to let go. We were forced to do the dreaded “switch.”

Packing up beloved sun dresses made of paper thin material that sways in the wind and replaced them with warm, fuzzy sweaters that will attempt to keep our body heat IN and the frigid cold OUT. We swapped open toed sandals for stark heavy boots. The last days of Indian summer ended and officially fall is here.
Every year at this time of year, I gripe about the change in season, temperature and weather, but this year I noticed something different. No I’m not talking global warming or anything like that, the difference I noticed this year was not environmental, it was perspective provided, through care of my 15-month-old nephew.

Isn’t it weird that we say months for the first few years of life, maybe it’s because babies are changing so much that we need to differentiate the exact age to mark the milestones of first step, first food, first dessert, first word etc. Years just aren’t exact enough.

Fall is like that too. Each day is so different that lumping all the spectacular changes into one seasonal category “Fall” just doesn’t seem accurate enough. There are …

The variety is vast because of the temperature, but the variety is also visible in the aesthetics. The colors seem to pop, as if polished by the cool air and finally able to vibrantly show off their best assets. But you have to pay attention, because the colors and temperature changes quickly. Like trying to take a picture of a setting sun; each shot is different because every minute the sky is changing—the sun is sinking and the colors are reflecting differently.

The same is true of fall. Every day “outside” is different.

At this point in my life, I’ve lived through 25 “Falls”—well this being my 25th. So although I have a fair share of Fall experiences, it wasn’t until this year that I really took in the magic of the season. You see I’m a summer girl, so I never paid Fall much attention. Yet, all of a sudden, because of my 15 month old nephew I am seeing the beauty of the season in a whole new light.

It was a few weeks ago, when it was still “Newborn Fall” or Summer-Fall, and I took my nephew for a walk. I placed him in his stroller and bent down to buckle him in. As I did, a big gust of wind whipped by our faces and my nephew smiled as the wind danced across his face. I fastened his belt and he pointed up to the tree’s “Ohh,” he said. I followed the direction of his chubby little finger and noticed he was pointing at the tops of tree’s swaying in the wind.

I went around to the back of the stroller and pushed him along to a park by his house. When we got to the park I freed him from the constraints of his stroller and put him down in the grass. He started walking, towards the swing-set (his favorite) when another big gust of wind whipped by. He turned and looked at me, and then pointed to the trees,

He looked at me and smiled, as if happy that I finally understood him. As we played and the wind blew I would stop him. “Listen Angelo,” I said as the wind whooshed by. He would stop in his tracks and stay still… letting it brush over him.

As people, it seems common practice to hear the wind, we even have a word for it’s sound. Cows say “Moo,” Pigs say “Oink”, and the Wind says, “Whoosh.” Even though I already knew how to identify wind, I never really noticed it anymore. I was too busy rushing to work, too busy getting to an appointment, attending a meeting or reaching a deadline. Too busy to hear it whispering it’s presence. I needed my nephew to reassure me of its wonderment.

In 2010, it is inherent to want to be productive and efficiently use the time we have. So we plan, we micro manage our lives with day-timers, Blackberry’s, planners, and calendars. We try to fill up every moment so that we can be productive in a fruitless attempt to do it all and be everything to everyone. All the while we are forgetting the little things.

I remember last year, at this exact time of year I felt such freedom being out of law school, but I also felt lost. I had no job, no direction, no prospects for a job, and the only thing that kept me going was to attend graduate classes two nights a week. Despite my most diligent, organized and best efforts to execute my plans, life had different plans in store for me.

So what’s the point of making a plan if we never really stick to it anyway? I guess we make them because they help us put our dreams into action. They provide us with to-do lists and schedules to follow that keep up on track. Yes, we know we will fall off track… that’s the whole point… but we have to do something, so we plan, we dream, we find something to work towards—even if it starts out as the wrong plan.

We do it because we can’t just sit around waiting for our lives to start and working toward what we think is right in that moment, is the only thing we know to do. But we have to be open to stopping in out tracks, taking an inventory of where we are, soak in the small moments and sometimes revaluate the plan.

You see, I thought that when you had a plan and you work hard, then things work out. They don’t fall into place. They end up the way they do, because you put the plan in motion. But when I stopped to reevaluate, I decided to pick the brains of some successful people whom I hoped to emulate,

"So, how did you end in your position?” Many would respond… “Ya know, I don’t know, it just kinda found me or it all fell into place I guess.”

This answer used to torque me. I never understood how things could just fall into place.

It wasn’t until recently that I realized, sometimes, we need to stop our plan and just let the wind blow us where we’re supposed to be.

Maybe this is why I’m so reluctant to let go of summer, because in the summer, every week I plan to go to the beach—and that’s it. I never know what I’ll do when I get there; I just plan to get there. Maybe that’s the secret… To plan a general idea and leave the rest open to adventure, opportunity and fate.

To stay up with the daily to-do lists, but leave time for error, relaxing, adventure. Leave time to stop and notice the small stuff, like the sounds and feel of the wind. Allow yourself to move with the changing breeze of life. Be open to new opportunity and when fate comes knocking at your door—open it, if it doesn’t go according to your original silly plan, another breeze will blow.

We only live once, so we have to make the most of it and we have to soak up as much as we can of it. The ever-changing seasons remind us of this. The seasons...and my innocent little nephew, who is wise enough to notice the power, pleasure and purpose of the wind blowing around us…

Life and weather are both unpredictable—the twists and turns are endless and you’re never really quite ready for them. They don’t ever fit in our original plan; in fact they throw a wrench in it. So ditch the rigid plan. Make one so you have some motivation but stop to see/feel the wind and when you do, let it blow you in whatever direction it pleases.

“I don't mind the wait, it's fine, as long as you know, it's the wait that could be the something…So, Let the wind blow us to wherever it says we are supposed to go.” ~ Joshua Radin 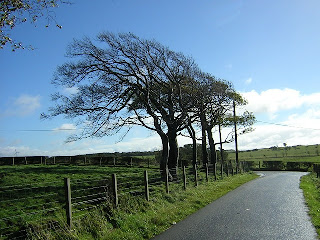