Pumpkins, candy, ghosts goblins, ghouls and witches. Halloween is on Sunday—but the most defining characteristic of course is Trick-or Treating. It is when children dress up in a costume and go door-to-door filling bags and pillowcases with chocolates and candies.

Normally, as per the political correct gender roles, it seems that only girls continue to play dress up past Kindergarten. Sure little boys have that “stage” around 3 years old where they refuse to take off their Batman or Superman costume, but once they hit first grade that routine is over.

Yet, Halloween seems to be the exception, so much that parents are spending tons of money on costumes encouraging their children to strut though the neighborhood. It’s something that we American’s are accustomed to. We grew up doing it and we don’t think twice about it

Historically, it is claimed that Trick-or-Treating resembles the late medieval practice of souling, when poor people would go door to door on Hallowmas (November 1), to beg for food from the wealthy in exchange for prayers for the dead on All Souls Day (November 2). Maybe back then prayers from the poor were more effective than from the wealthy… who knows?

The point is that this modern practice of trick or treating does resemble this “souling” business, but it doesn’t seem to fit modern day ideals. In 2010, a time when you’re not supposed to talk to strangers or trust anyone you don’t know, it seems odds that kids are still going door to door.

Despite the oddities, they do it. The kids come out in droves dragging their bucket or bag around to fill it up with as much candy as they can carry, from anyone and everyone willing to contribute to their self induced sugar coma. I doubt these kids will be praying for any of the people giving those goodies, (all historic roots are left behind) instead, today we adults just get good-old satisfaction for continuing a tradition.

Doesn’t it make you feel good to spend $6 on a half-full bag of candy just to give it all away to some bratty kid who forgets to say thank you? Real feel good stuff…RIGHT?

I’m just kidding… kind of… (Although the lack of manners in today’s society will be in an upcoming blog called “Bring out the paddles, chivalry’s not dead yet!”)


Anyhow, all other 364 days of the year we try to teach our children to be cautious, beware of strangers. The textbook example is don’t take candy from someone you don’t know, but on Halloween, all bets are off. On Halloween, we make an exception and practice indulgence.

Indulgence, this seems to be a logical explanation for why we find it normal for children to dress up like silly characters and roam the neighborhoods collecting candy from strangers. Children indulge in make believe and fantasy when they dress up and indulge in gluttony as they tear through the bag of candy. 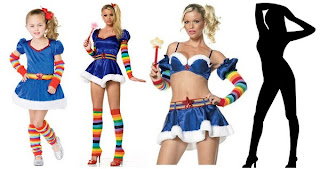 It’s a societal pressure, as we women get older, we leave the cute and fun costumes behind and we move on and progress to the “adult” aisle of the Halloween store. Now, it’s truly nothing like an adult bookstore or movie store, however, it’s definitely not a place where you find a costume to be the girly green M& M or Tinkerbelle.

I recently was finishing an assignment for a magazine I freelance for and was sitting at my kitchen table typing away on my laptop when my sister and her fiancé came barreling through the front door. My sister’s fiancé had a picture in his hand.

“Check this out,” he said, while handing me the paper. It was a picture of a man in a brown costume with angel wings and a halo.

“I don’t get it…” I say staring at the sad looking angel costume. Do you want to be a chocolate fairy or something?

“No.” he laughed. “Look again, the costume is called “Holy Shit!” Pam doesn’t think I should spend the $60 on it, but don’t you think it’s hilarious?”

I couldn’t help but burst out laughing. It really was ridiculous and hilarious. Truth be told, I was relived he wasn’t trying to be some chocolate fairy from the Candy Land game.

In reflection though, it doesn’t seem fair that guys get the trick part of Halloween, the funny/joking aspect. They get the “trick” and we ladies are stuck with the “treat.” I use the term STUCK because in costume/clothing terms, this means that while the guys bask in the silliness and fun of the holiday; we concede to the “one day a year rule”.

We ladies, head down the “adult” aisle to find the most flattering, microscopic, slutter-ific costume we can get our hands on. We are the “treat” because these costumes make us the eye candy of Halloween.

As I said before, I followed suit and did my dutiful march down that aisle. My father had cringed as he looked at my newly purchased costume hanging in the cheap plastic bag. Despite his look of horror, I wore it out on Halloween anyway—hey it was “the one day a year.”

Maybe by 25, we had our few years of indulging in the freedom of anything-goes-Halloween-sluttyness and we remember why it only happened once a year—because being oogled by drunks at a house party or bar isn’t really that fun anyway. Maybe we realize that we’d rather spend $60 to $100 on a nice pair of high heels rather than some microscopic costume that we will inevitably freeze our ass off in and end up in the trash anyway.

So, if this year you find yourself feeling like you just don’t want to participate in the annual Halloween Slutification, then don’t. If you haven’t done it yet, then for “life experience sake,” I think everyone should partake in the skank festivities once—just to see what all the hype is about. Trust me, you’ll quickly realize you’re not missing out on anything, because it really is just hype and you really will be freezing your ass off!

SHORT AND SWEET…AKA…MORAL OF THE STORY

I guess feeling this way, is an indicator that I’m getting old, but thank goodness… Nobody wants to be the old head still clinging tight to the slut card. Truth is, when you really think about it, the herd of children marching though the neighborhood dressed up in costumes is just as weird as the herd of slutty-look alikes marching through the bars… But at least the kids are leaving with candy… they definitely have the better deal.

Halloween was confusing. All my life my parents said, "Never take candy from strangers." And then they dressed me up and said, "Go beg for it." -Rita Rudner


“I'll bet living in a nudist colony takes all the fun out of Halloween!” - Anonymous 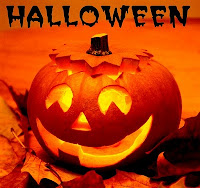 Email ThisBlogThis!Share to TwitterShare to FacebookShare to Pinterest
Labels: "Lana Marye", "on the rocks", "Straight Up", "with a twist", 20something, costume, Dress up, Halloween, slut
Newer Posts Older Posts Home
Subscribe to: Posts (Atom)