Another person falls victim to bullying.  This tragic and horrible epidemic is newly taking over the teen and tween population.  Spreading like wildfire amongst the most impressionable generation all because of the bastard internet. 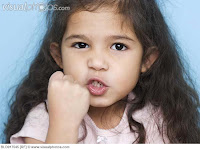 In fact, bullying has been around forever. I remember sitting with my grandmother.  A 5’ foot tall, Irish woman, who had the sweetest face, and the sharpest tongue.  She was cute as a button, but that was only a façade.  I must have been only 5 or 6 years old and I remember her teaching me a little song.  I sat on her floral couch, wide-eyed and singing along.

It was a silly little song, and with each line, we performed the corresponding movements.  We showed our pinkie, then our thumb, and finally raised our fist with a very serious look on our face (crinkled nose and all).  After the song we would laugh and laugh.  Then she would become very serious and looked at me with those piercing blue eyes.


“You listen to me honey; this is just a silly song.  And I want you to know that you never throw the first punch… ladies don’t act like that.”

I shook my head in affirmation. “Okay Grandma.” I said.

She continued on, “But if someone does start pushing you around, then you raise that fist and defend yourself like the feisty Irish girl that you are.”

I smiled up at her.  She was the picture of class, with her pearl necklace and long pink skirt, but those who knew her, knew better than to cross her.  She could hold her own.  She was everything I wanted to be when I grew up.

I held onto the talk with my grandmother.  Drawing on it time and again, as the tween and teen years approached.  I never did have to recite the rhyme and throw a fist, but I used my words to fire back quite a few times; stood up for myself when no one else would.

I distinctly remember 7th grade, riding the bus home from middle school. An 8th grade girl, who, for whatever reason, decided to pick on me.  She made small comments about how she wanted to cut my hair, rip my pink backpack off my back and beat me up.  After about a week of this, I told my mom I didn’t want to take the bus anymore.  Through sobs I explained each humiliating moment to my mother.

She sat stoic, listening and offered me a comforting hug.  Then she looked me straight in the eye and said,


“I am not picking you up from school.  You are going to take that bus and your going to tell that girl to pick on someone one else.”

I remember panic washing over me.  Didn’t my mother know that that was the LAST thing I was going to do? I wanted to avoid her and that bus… forever.


“Lana, girls like this are all bark and no bite.  You stand up for yourself and she won’t know what to do.  She’s a bully and she’s used to pushing people around.  Don’t let her push you.”

My mother continued on with this inspiration “Rocky Speech” to get me pumped up.  Throwing in that my grandmother would have never let anyone push her around, and I had to carry that legend on.

The next day, after school, I boarded the bus, sat in my seat and took a deep breath.  Trying to collect my thoughts as the bus pulled away and she began to taunt me.

When we reached the first stop, I stood up and cut her lewd remarks off.


“You know what Rachael, if you want to beat me up so bad, then get off the bus and do it.”  She fell silent, so did the whole bus.  “Come on, you hot shot, you want to yell at me every day then back it up.”  I took my back pack off and walked to the front of the bus and got off.

The driver looked at me while I stood waiting and gave me a wink.  The bus sat at that stop for three full minutes.  Nothing happened inside.  When I stepped back on, Rachael was sitting quietly in her seat.  As I walked back to my seat, I shouted one more thing to her.

“If you don’t have the guts to back it up, stop flapping your mouth!”

I sat back at my seat.  The bus didn’t erupt into applause or anything like that.  This was real-life, not some Lifetime movie.  But that girl never bothered me again.  In fact she never bothered anyone again.  She was so embarrassed that someone called her bluff, she never made another peep.

So why can’t people just “handle it” in modern day, like I did in the 90’s? Why?  Because there is no shame, or embarrassment or ownership in a typed comment that is posted to a public wall or profile.  The opportunity to say it in person is lost in the incessant comments and postings.

Bullying is old hat, but it’s only recently that the internet has thrown it into the spotlight.  Before the digital era, kids could only bully each other at school or at an after school event.  Now with the internet, the bullying can follow them home and onto their social media pages.

It’s sad really; that the drama of the day, can’t fall idle when the hallways become quiet in the after-school hours.  It used to be that whatever kid was bullied or humiliated that day would most likely be out of the spotlight the next day.  You see, the 24 hour window of after-school time was enough for the adolescent brain to move onto the next oh-so-dramatic event.  Leaving the kid that was Thursday’s sacrificial lamb, to be old news by Friday—If not, definitely by Monday.  In current day however, there is no quiet time for the humiliation to sizzle out.  Instead, the fire is fueled, kept alive and well, on facebook, twitter and other new media.

But it’s not solely the internet’s fault.  I still think the onus lies on the parents.  Why are theses kids, ages 11-17 even allowed to have facebook pages, webcams, YouTube or twitter accounts?  If posting pictures could be considered child-pornography, because you’re underage, then you shouldn’t have Facebook.  Facebook was created for college aged students in the early 2000’s.  It then grew to be inclusive to older populations who could join the city they lived in as their network to create a page. Somewhere along the line, the idea of having to be “part of a network” died and Facebook was available to everyone.  So parents allow their tweens and teens to create digital identities.  So I say to you parents…what the hell did you expect to happen?

We’ve all been bullied.  We’ve all been picked on, teased and embarrassed at some point in our adolescence.  If you haven’t, well then you’re lying.  But what I don’t remember are kids that were “cutters” or “emo.” (Which by the way, stands for EMOtional?) This whole generation of hyper sensitive, fragile paper-thin tween and teens need their parents to pay attention to them and teach them coping skills.

So why expose your children to an adult forum that you know will only encourage the taunting?  What do you honestly think will happen to a middle or high school aged child who has Facebook?  Do you think they will post life experiences, perspective and respectfully comment on friend’s posts and pictures?   Get your heads out of your asses.  Be neotenous, and remember the soap opera of your teenage years.  The same stuff is going on. Remember how hard it is for your kids and do them a favor by telling them to get off the computers.  They don’t need social media; they need to learn social skills in real life.  Set them up for success NOT failure.

SHORT AND SWEET…AKA…MORAL OF THE BLOG
Talk to your children! Teach your children to communicate and speak about their emotions from an early age… then as they get older it won’t be difficult to speak with others if they are being bullied, harassed or threatened  in any area of life… Standing up for yourself is what each and every one of us needs to be comfortable with.

“Stand up for what you believe in, even if you’re standing alone.” –Anonymous

“Bullies are always cowards at heart and may be credited with a pretty safe instinct in scenting their prey.” –Anna Cooper